I had a vision for a baby quilt for a co-worker who just became a grandmother on Tuesday morning. I stopped at Jo-Ann's on the way home for fabric, got to work, and it's done! It was also a practice project; some things worked out better than others.

I wanted to use the disappearing nine-patch technique, so I made four squares in this layout, using six-inch squares as a start. The baby's a girl, so I wanted something feminine, but not too baby-ish. Fabrics are rose, cream, and chocolate. 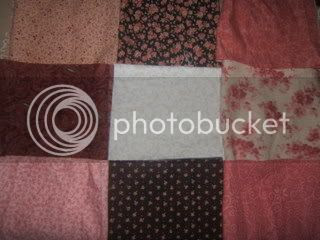 Some slicing and re-sewing later, and it come together into this: 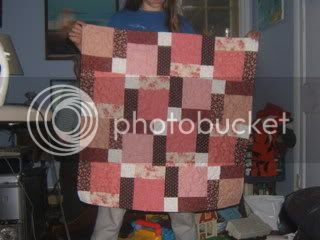 Part of the experimenting was the design, and I think that worked out very well. The other part was the free motion quilting - it went well enough for me to be willing to gift this quilt, but I can see EVERY little blip that's not quite right. A close-up of one part: 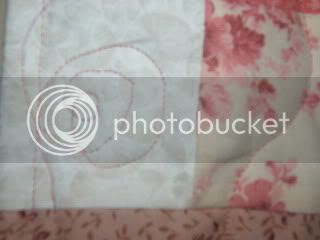 I'm going to make another one - I intentionally cut extra strips so that I'd have enough already cut for two and put the [hopefully better quilted] one in the show.

Awesome quilt! And Yahoo on the potty training! That's awesome!

It's lovely...thanks for showing us!

I am jealous of the potty training. I love the colors of the quilt.