Shoulda been a snow day

And I would've gotten a lot more done. But no.

According to National Weather Service forecasts, we were supposed to get a "dusting" of snow. Well, when The Lovely Daughter and I left for her art class this morning at 10 am, I might've believed that. There were lovely little swirlies of dry snow on the road; no problem. By the time we got about three quarters of the way there, it was NASTY. I nearly rear-ended a police car (!) because the roads were so slick. I decided to go on ahead to class in hopes that the roads would get treated before we had to go home (3 hour class). I called TMOTH to warn him to NOT go to karate because of the roads and stayed in the art classroom and read on of the Art Barn books on quilting and schmoozed with The Lovely Daughter's teacher and fellow student.

After class, we had lunch at Subway and bought birthday presents for the Small Man at K-Mart and headed home. It was a nightmare drive - slick slippery roads that weren't well plowed or sanded. We've probably got 4 to 6 inches of snow. I spent the afternoon napping to recover, and TMOTH made pizza for dinner. After dinner, I got the last of my 9-patch and snowball blocks in under the wire: 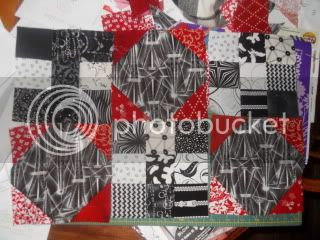 Close-up of the snowball - don't remember if I posted this before: 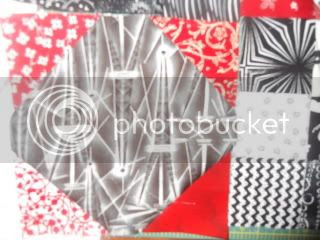 And finally, the "backing" for this quilt - really, the quilt is the backing for this material: 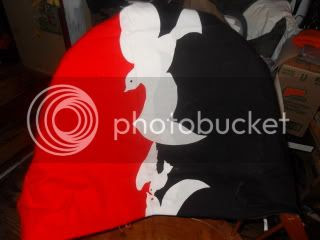 Really, words do not do justice to how much I love this material. The photo is basically just the middle third of the width of fabric; it's red on one side, black on the other, with the cream birds bisecting the two. I have no idea when or where I got it; my best guess is that my grandmother bought it at the thrift store and I inherited it. There is NO clue on the selvedge about where or when it was made. I'm just happy I will finally have something done with it.
Posted by Michele at 6:49 PM 1 comment:

I got the diamonds laid out on my "design wall" - otherwise known as my bed.
Cookie was my "helper" today.

Here Cookie is supervising as the first diamonds are placed for the center: 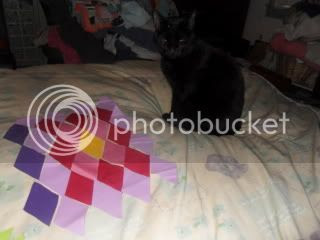 He doesn't seem to understand that the design will get bigger: 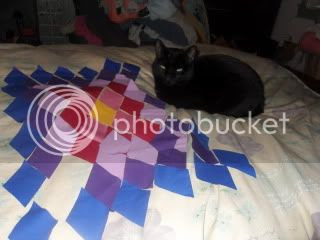 Not happy about being moved - notice the position of the ears! 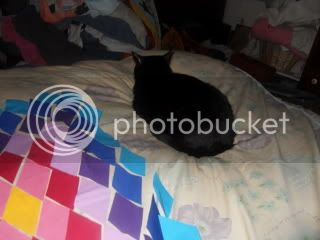 Guarding the pieces that got stuck under his feet: 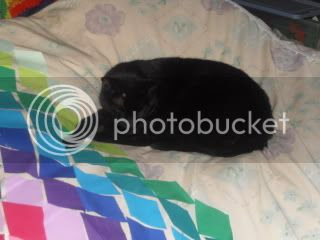 Now to sew it all together and finish it.
Posted by Michele at 4:35 PM 2 comments:

Anybody else guilty of this?

I sometimes catch myself "saving" some of my [often really small] scraps of material that I'm cutting into squares for the 9-patch and snowball quilt. Why is this, exactly? Is it some fear that I inherited from my depression-era Memaw, or some silly quirk of my own? I'm consciously trying to overcome this and NOT save something "because I might need it later" - dammit, I can use it NOW.

I've gone through about 4 or 5 more different colors; I have 4 or 5 left to cut. To start. I think I will love this quilt when it's done, but cutting is a pain. Literally, a pain. I have to use the big mat, which I use on the bedroom floor. I'm taking breaks, but my back isn't as young as it used to be.
Posted by Michele at 5:39 PM No comments:

An interesting idea - R'Ann over at This That and the Other Thing asked her readers to create lists of some of their favorite blogs - and WHY they're our favorite. On first glance, you would wonder why R'Ann is on my blog list. She's a staunch Catholic, and well, I swing between agnostic and Jimmy Carter Baptist. Her blog is mostly book reviews, and let's just say that our taste in books differs quite a bit :)

Well, she's a W sister, first of all. She and I both attended Mississippi University for Women from 1979-1983 and graduated on time! That's why I *started* reading her blog.

I keep reading because I like hearing her thoughts on the books she reads, why she likes or dislikes them, and her thoughts on modern Catholicism. I should comment more :)

Other favorite blogs include:

Notes from the Voodoo Cafe: You NEVER know what this woman is going to say next. But it's always interesting.

Quilting in the Valleys: Gina lives and quilts in Wales. She's a consistent reminder to NOT be afraid of color, the brighter the better.

Front Porch Indiana: Someone who keeps chickens AND sheep. Swoon.

There are lots more, on my sidebar.
Posted by Michele at 5:39 AM 4 comments:

All of the black and white fat quarters I bought at last spring's quilt show! AND a piece of material for the snowballs! You'll have to wait on a picture, and the material is so old (from 2000) that it is no longer available - so no link to the design. It's "Sky Ride" from the Allentown Art Museum Century of Progress collection. Verrry art deco.
Posted by Michele at 5:25 PM 2 comments:

I finally started cutting the pieces for my guild challenge quilt. I have over a month to get it done! This is my second idea - I had the first idea all drawn out, but it was really complicated, and I'm not sure that visually it would have worked as well as this one. The secret one :)
Posted by Michele at 5:36 PM No comments:

These are our two pupkins: 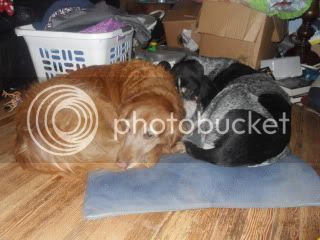 Kona is the golden retriever; she's 11. Cletus is a blue tick hound, he's 10. I REALLY need to purchase/make another pillow for them; they take turns bullying each other off the one dog bed. Usually Cletus wins because he's the biggest jerk dog on the planet. 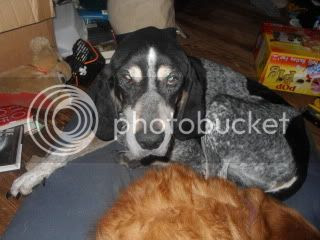 Such an innocent face he has. Hah!

Kona has has it just up to HERE with the pictures: 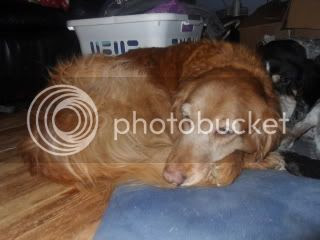 TMOTH and the mid-kid went off to see Avatar today. I stayed home and quilted! The little puzzle quilt is now quilted and about a third bound.

Some sewing, with pictures

This was the result of the Friday night sew-in: 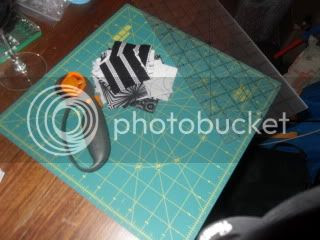 One sad little stack of 2.5" squares. Next time maybe I'll have something ready to work on. I was just late getting home, and then wound up fiddling around trying to get a computer game to work for the mid-kid.

Tonight, I got the first blocks together for the quilt-along: 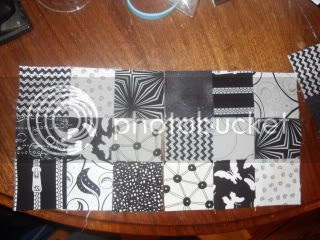 I still haven't found a nice piece of yardage to make the snowball blocks out of yet. That doesn't mean I don't have one, I just haven't done a thorough search through the stash. Worst case scenario, I have to go shopping.
Posted by Michele at 6:23 PM 2 comments:

The story of my life

Posted by Michele at 6:16 PM No comments:

Back in the fall, the group of people I was working through "The Artist's Way" with decided to exchange ATCs. It was a wonderful experience. I had the chance to try out some new techniques, and HOLY COW, I achieved my vision! I also had the joy of receiving little jewels every couple of days in the mail.

I did mini-quilts on peltex. I did small strip patchwork about 3.5 x 11, then free motion quilted them onto the peltex. I cut them to card size, then appliqued the ginkgo leaf (a glitter organza) onto the quilt sandwich (so the outline also appeared on the back) and around the edges.

This is the whole batch - one for each of my friends, and one to keep: 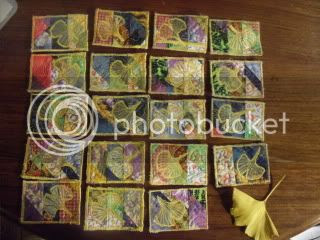 I have to admit, this one was my favorite. I had two smaller pieces that I had to join together - you can see the line of yellow that is my satin stitch. 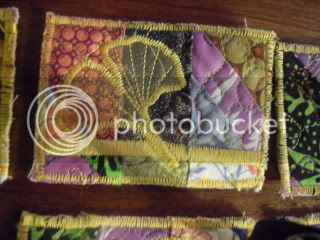 Posted by Michele at 9:34 AM No comments:

I started working on this a few days ago. One of my resolutions for LAST year was to get over my fear of fusibles, so it's nice to finally get to it - even if a bit late. I used WonderUnder to fuse the batik puzzle pieces to the background: 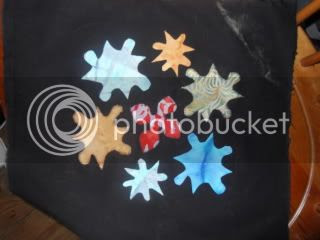 The puzzle piece in the middle represents Time, and the others all of the things that have to fit into that Time - and just don't.

I'm using my electronic machine's buttonhole stitch to sew around the pieces before I quilt it: 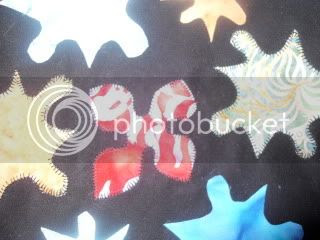 Clearly, I either need a better camera or better knowledge of how to use the one I have.
Posted by Michele at 9:23 AM No comments:

I used the "puzzle" prompt and played with WonderUnder for the first time. It's so much fun it's scary. This will also count as a journal quilt! I've decided to do 10 x 10 instead of "page" size. Photos to come later. It's just fused now, no stitching yet.
Posted by Michele at 7:53 PM 2 comments:

You can't just want it.

I think I should possibly have this tattooed on my arms so I can't ignore the message.
Posted by Michele at 5:44 PM 1 comment:

OK, most of it was mending, but I did make one quilt block for our guild president's quilt. I really don't know what TMOTH does to his pants, but he's awfully rough on them. I mended two pairs with tears, and hemmed some sweat pants. None are church-worthy, but they work for hanging around the house.
Posted by Michele at 5:42 PM No comments:

Following discussion on the QuiltArt list, I have an official WORD for 2010: IMPETUS.

It's the closest word I can come to that represents positive aspects of the opposite of procrastination. I'd like to live up to it in the coming year.
Posted by Michele at 5:01 PM No comments:

More to come.
Posted by Michele at 4:48 PM No comments:

We went to this exhibit today at the National Geographic. Tickets were one of my husband's Christmas presents. The January 1 ticket date was just accidental; it worked out really well because there were no crowds on the Metro, parking was free, and lunch was easy.
Posted by Michele at 6:24 PM No comments: