I was sewing on the edging fabric for the star quilt today when pre-teen's friend asked who it was for. "ME," I said, "since nobody else likes it."

"`Yeah, it's hideous," was the pre-teen's comment. (Friend politely said it WASN'T hideous, but she's polite.)

I then told pre-teen I had swirly dotty green fabric for a ruffle. Her response? "Oh, my lord." Hee hee - fun tweaking the kids. I think I'll piece the back (i.e. alternative front) with a pretty flower print as a center block.
Posted by Michele at 7:14 PM No comments:

Yesterday I finished sewing the ribbon on a Target T-shirt. When I was rushing through Target on my way to work the other morning to buy underwear, I skimmed the sale rack and bought some basic t-shirts for about $2.50 each. What I didn't notice was that the navy one had some horizontal cuts, like it was on the top of the box and got ripped by the box cutter.

I could have returned it, but that would've meant another trip to Target. Instead, I sewed ribbon at the level of the rips. Love the ribbon, not sure about the flower, or where I put the flower. It may move. 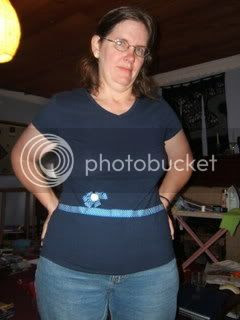 Today I went by the Friends of the Library bookstore. Major scores: 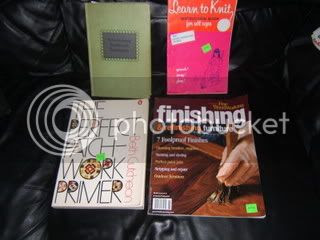 Posted by Michele at 7:22 PM No comments:

A tribute to Memaw and Grandma

In other words, a tribute to my grandmothers.

I literally cannot remember a time when I couldn't sew or crochet, because my grandmothers taught me.

Grandma D. took care of me when I was little when my mother went back to work. She moved about 30 miles away when I was about 3 or 4, but we still visited often and were left for weekends on a regular basis, and a few weeks in the summer. I only got to see Memaw at Christmas and during the summer when I was little, but she moved across the street when I was in middle school.

All of my love of working with fabric and yarn I got from then. I really need to take photos of some of the work they did and post it. Most of it was functional - they were both rural children of the depression and definitely knew how to make do. They're the reason I wash fabric before using. They're the reason I can't just throw out the ugly pieced star.

I miss both of them terribly.
Posted by Michele at 4:54 PM No comments:

What was I thinking?

I made this bit of a quilt sometime a long time ago - early 80s, maybe? 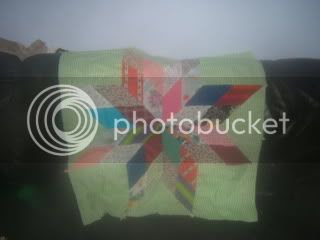 The diamonds that make up the star are an *interesting* (ahem) assortment of fabrics - but I still really like the green stripe. I've decided to go ahead and work it up into a twin-size cover/lap quilt. Fabrics are needed to finish - maybe a nice green floral?
Posted by Michele at 7:34 AM No comments:

I saw this challenge on The Purse Project blog.

One of the UFOs in my stash of stuff is this unfinished baby quilt: 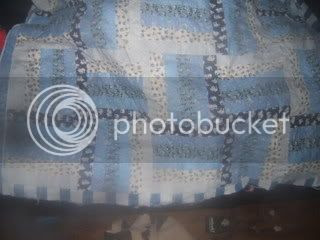 with a close-up of the fabrics here: 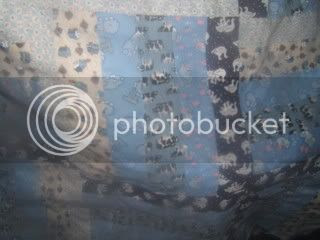 BUT, the backing fabric is this jaunty nautical stripe, it just whispers "beach" to me: 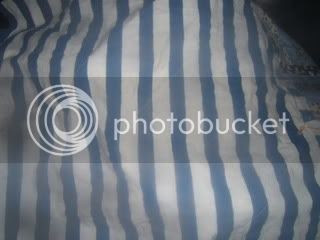 I'm currently ripping. I think the reason I never finished it as a baby quilt was that I'd done diagonal machine quilting and planned to fold over the striped fabric as a binding, and it just wasn't working well. Since there are no babies on the horizon, I'd rather re-work it into something I'll use.
Posted by Michele at 7:06 AM 1 comment:

TMOTH had a great idea this weekend looking at the rocket ship quilt. He said, "I think you should put that on a T-shirt for him." And so: And modeled by the happy recipient: 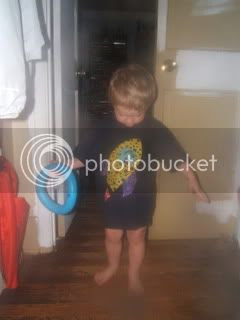 The photos are smudgy because there was yuck on the camera lens. Now cleaned off, but I'm not going to re-shoot these photos.
Posted by Michele at 6:56 AM 1 comment:

I learned to knit on the internet

Really. I decided I wanted to learn to knit and looked into classes. If a cheapie class had been available at Michael's or AC Moore, I'd have taken one, but all that were available were $65 classes at the fancy wool shops. So I looked online and Michael's has a video demo, plus there are diagrams on other sites as well. Right now I'm working on a neckwarmer.
Posted by Michele at 4:23 AM No comments: 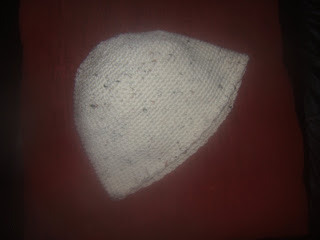 but these actually wound up on the old card.

Completed (sort of) hat for MIL:

A beige acrylic with flecks.

It needs a little pin with felt acorns and oak leaves and a hat for FIL with stripes using the flecky yarn and a solid, probably denim blue. 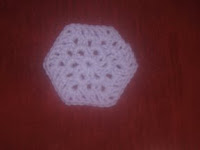 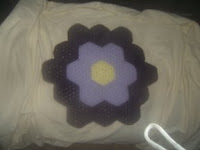 And, last but not least, the rocket ship quilt. The more I work on this one, the more I really like it. I've never done applique before, and it's really a nice way to quilt and still hang out with the family. 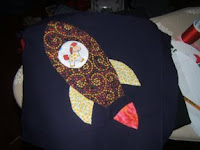 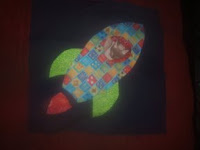 I've ripped out and redone the flames in the first one I did (top) so now they're narrower (bottom). I love this quilt.
Posted by Michele at 7:28 PM 1 comment:

And yet, much is going on in the crafting sphere.

I went to my second quilt guild meeting and had a blast; signed up for their Secret Sister program as well. It was the end of the year party, so had a nice time talking to some of the members. There was also a box of free fabric and notions, so I came away with a bunch of small scraps, including some that can be used for the rocket ship quilt.

The pre-teen and I went to the fabric store after school on Friday to pick out materials for her new pencil pouch. She saw one at the store and I told her I'd make her one she liked even better. We picked out fabric and she came up with a design drawing - I'll need to do a paper mock-up later to tweak it. Other than setting limits on the fabric weight, I let her choose whatever patterns she wanted; she has a really nice sense of design. Hancock's also had bags of bolt ends for sale, so we bought a couple of bags. There were a few nice pieces of quilting fabric, another nice upholstery cotton which will make a tote bag or pouch, some lining fabrics - even a skein of embroidery thread!


I made it to Michael's for their yarn sale on Friday as well. Red and black for the mid-kid's Christmas present afghan, plus some hat yarn. I finished off a hat for my MIL at the baseball game on Saturday. It's a little tall, but could be cuffed.

The flower garden afghan is proceeding as well. The more I work on it, the more I like it.

Pictures as soon as we get the new memory card for the camera!
Posted by Michele at 7:14 AM No comments: