Cathy over at Crazy by Design is having a wonderful giveaway. SIX different wonderful packages. I'd like any of them, but my vintage gene won out, and I picked #4. So if you follow my link, pick something else to enter for! See: 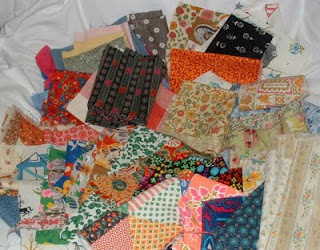 A bit of work on ATC

Not much creativity around the house today - I continued picking up stuff, but mostly I watched the James Bond marathon on SyFy. (How stupid a name for a TV channel is that, anyway? When it was SciFi, I had no problems, but with SyFy, I want to pronounce it "siffy.") I did get the rest of the applique pieces for my ATC cut out and ready to go, and trimmed up about 3 more bases. Hopefully I will have enough done for the bases - otherwise I'll need to change the foot on the dang machine again.

I can't post any photos until the recipients get them - only little teasers, and that's no fun.

If I'm going to do the ornament exchange this year at Guild, I also need to get busy on that as well.
Posted by Michele at 6:47 PM No comments:

I made my first few ATCs, and they've turned out about as well as I hoped. No pictures, because they're going to be traded with other people, and I want it to be a surprise :)

If I was going to post pictures, they'd just be weird pictures of sunsets with contrails hidden behind trees, so you're not missing much.
Posted by Michele at 4:31 PM No comments:

The annual costume extravaganza is over. The mid-kid had to have TWO costumes, since his dad thought up a great costume for him for his karate Halloween party.

The Lovely Daughter costume: a Dandy-Lion. 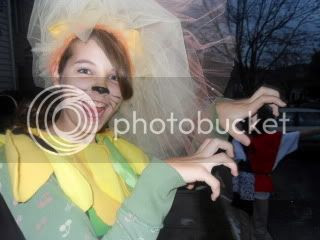 There was unbelievable angst this year about not buying a costume. Tears, shouting, the whole nine yards. The major problem I have is the incredible skimpiness of nearly all of the adult women's costume. Simply NOT appropriate for a teenage girl, no matter what the teenage girl thinks.

The Mid-Kid costume #1: Squire/Knight/Prince. [his idea, the one that went trick-or-treating] 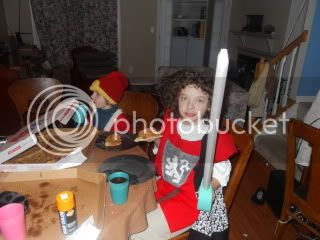 The Mid-Kid costume #2: Mr. Derek, his karate instructor [his dad's idea] - the picture is of the mid-kid with the real Mr. Derek. 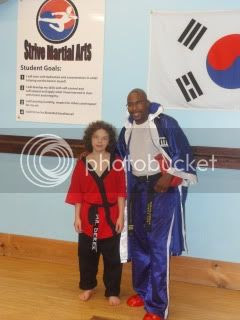 Small Man's costume: King De-de-de [a video game character]. This is at the KinderCare Halloween parade. 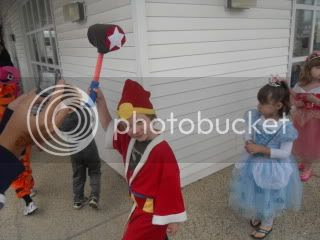 All kids together before trick-or-treating: 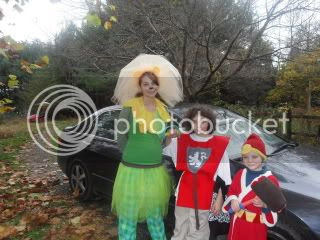 The trick-or-treating group [we picked up a couple more along the way]. This group has been going together for many years. 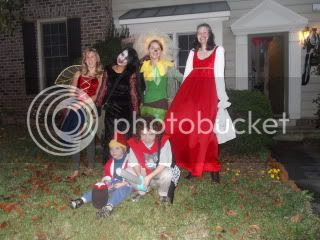 Much candy was acquired. I was the only casualty of the evening - my ankle went out from under me and I went down on a concrete path, scraping the heck out of my wrist.
Posted by Michele at 9:47 AM 1 comment:

Art Every Day Month - Day One

I've officially signed up for Art Every Day Month.

I'm off to a good start - I made these little flowers this morning: 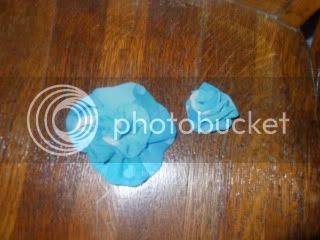 At least one, and probably both, will go to my Lovely Daughter for her birthday next week. I have a few beads sewn into the center of the big one, and a pin back sewn on. Just need to find [or break down and buy some more] hairclips and sew one on and it's done.
Posted by Michele at 7:32 AM 4 comments: