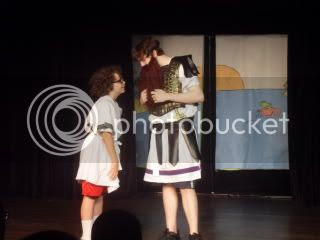 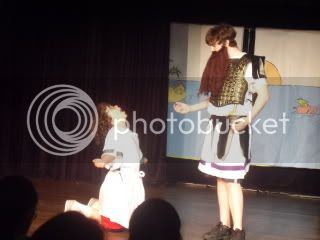 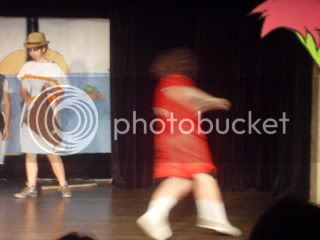 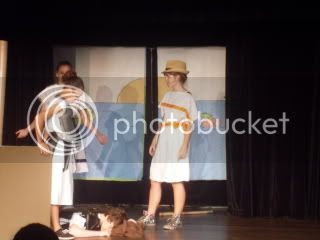 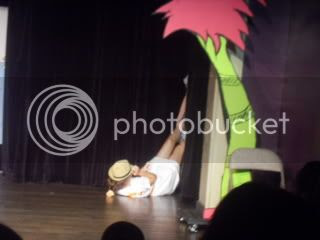 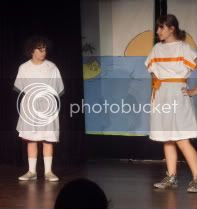 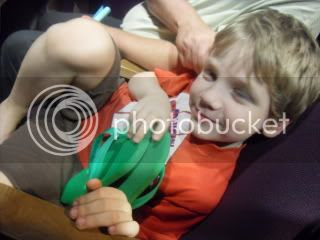 Posted by Michele at 6:10 AM No comments:

I thought I would have some "Roasted Turkey & Vegetables with white and wild rice" for my lunch today. Doesn't the picture on the package look yummy? 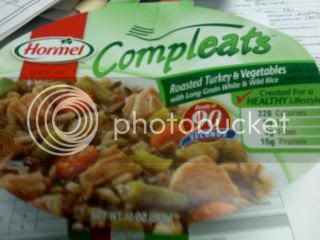 Well, ahem. This is what it looked like when I peeled the plastic back off the serving dish after I heated up as per directions: 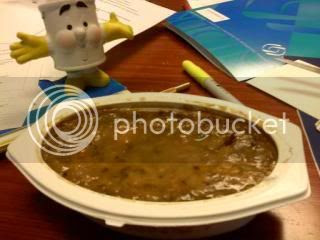 Um. Yeah. Stirring it up didn't help any. I was brave - I tasted it. NOT gonna eat it (I did bring it home for the dogs). Happily my mini-fridge is well-stocked.
Posted by Michele at 5:30 PM 4 comments:

All Over the House

So, I was whining yesterday on one of the Yahoo groups I belong to about how my quilting/crafting "stuff" was ALL OVER THE HOUSE. I was then informed that pictures were in order. So, OK, you asked for it:

1. The Kitchen. How, you ask, can there be crafting stuff in the kitchen? Well, there's a kitchen island that's right next to the stairs that go up to the playroom where the "official" crafting area is, and I have a tendency to put things there "for a while" until I take them upstairs. Yeah, right. 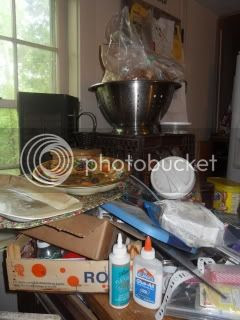 The big silver colander serves most of the time as my bread bin. The white lid is full of those beads you iron together, so technically they're my kids' stuff, but it still falls under "crafting" so I get to organize it (or not). All of the stuff in and on top of the clementine box (and the glue) needs to go upstairs.

2. The Dining Room. Now, to be fair, I actually do a lot of the actual work in my dining room. I mostly sew on the kitchen table, since I share my crafting area with the Wii and Playstation and kids' computer. However, I'm not sure there's any excuse for just leaving stuff here and not putting it away. 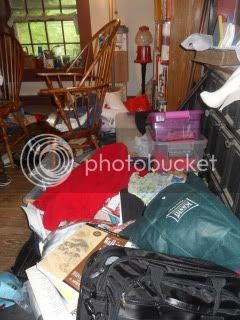 To show that I *DO* get some work done, here is my mid-kid's quilt, sandwiched and pinned last night on the dining room table: 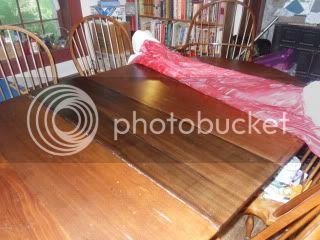 3. The Living Room. Things don't tend to pile up in here, thankfully. However, it's where the laundry goes to get folded, so there's often a small pile of material that's been washed hanging out on the couch or loveseat waiting to be put away. 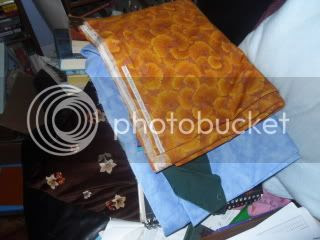 4. The Foyer. So, there's this nice big desk that's waiting to find a permanent home...so things get put on top of it. Like fabric. 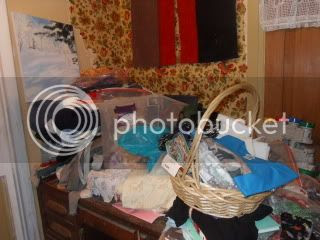 5. Upstairs hallway. Along with the cat carrier that needs to be put away (see the pattern here?), there's a bag of fabric sitting in front of the bookcase (which has quilting magazines on top). 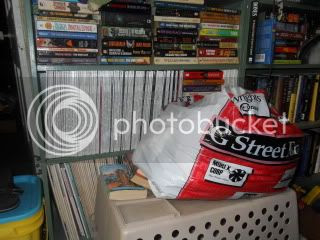 6. Our Bedroom. Just an example - a bin of material on the floor. I think there's more hiding around the room - along with the supplies masquerading as decorations. 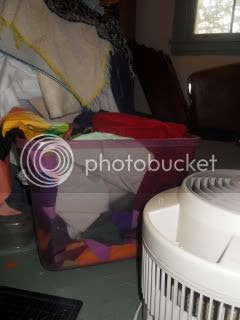 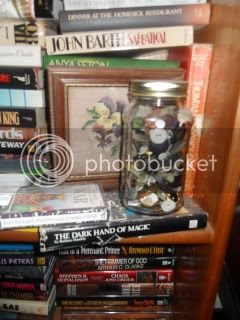 There's actually NOT any in the bathrooms, or in the kids' rooms. And I'm not showing any pictures of the playroom/craft room because it's just too scary right now. Sigh.

I went to a "quilt club" meeting at one of our local fabric shops last week, and the guest speaker was a professional organizer talking on how to set up a quilt studio. Some good ideas, some that won't work for my house. (Fabric on open shelves? Not here in the land of dust and hair. Locking bins are my friend.)
Posted by Michele at 7:05 AM 6 comments:

I took the tension assembly off the machine, put it back together according to the instructions, and re-installed it on the machine. (This was not successful the first time, or even the second, but it was accomplished without swearing.) I am now sewing a perfect stitch on as setting of 5!

I don't think it's sewn this well since I wrangled it off my mom :)
Posted by Michele at 2:15 PM No comments:

Today we went to the Maryland Sheep and Wool Festival. It's probably a good thing I had whiny kids at the end asking to go home, because I'm feeling a little heatstroked myself.

As always, the alpacas were a huge hit with my boys.

These guys had been sheared, so they looked a little goofy. BUT, the clippers left designs in their short fur that looks really cool. 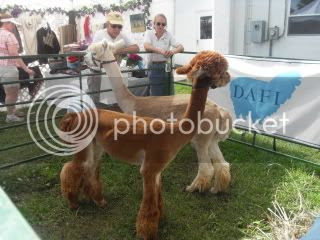 Here are a few more alpacas, these are not yet sheared. 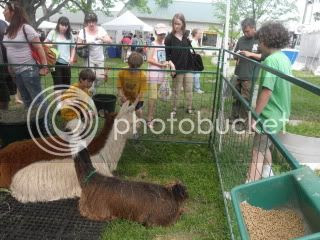 The yurt was new to us (we didn't make it last year) and something else the boys really loved. 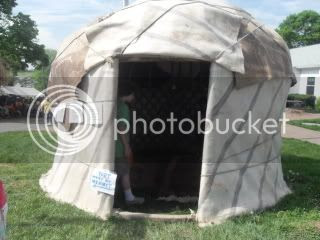 I didn't seem to take as many sheep pictures this year as in the past. That's too bad, though, because I think Miss Art-Girl should paint a picture to enter for next year. 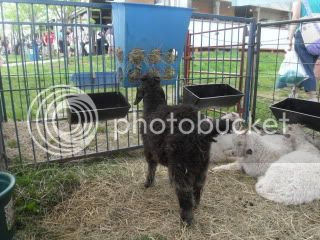 I think this guy saw the red light on my camera and knew a flash was coming! 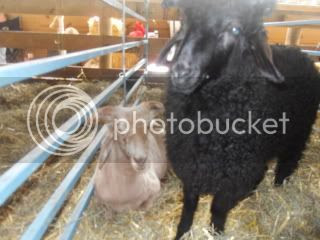 All three kids, with lambs: 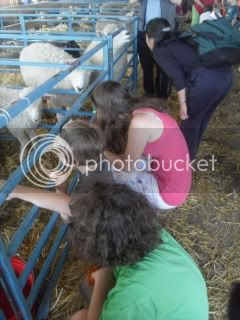 The small man, petting a sheep: 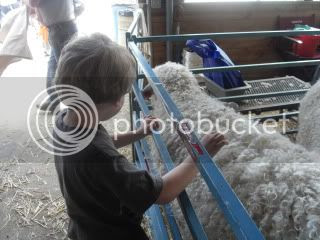 My favorites are the llamas. They're just so standoffish and regal. 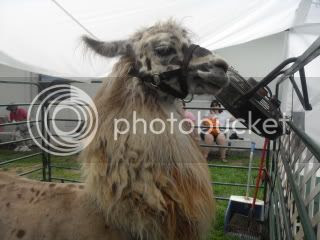 I didn't manage to buy any wool (it makes me itch). I did buy a small block of beeswax, a half-gallon of maple syrup, three over-the-door hangers made out of silver spoons, two seafood forks, a ring and some soap for my daughter, some glass beads for the mid-kid, a kid-sized broom for the Small Man, and a regular broom for me. TMOTH bought himself a cool pottery mug. Plus lots of food.
Posted by Michele at 1:40 PM No comments:

What is this plant?

It's a tallish shrub, about 6 feet tall. It's growing in the part of our yard that has lots of volunteer plants. 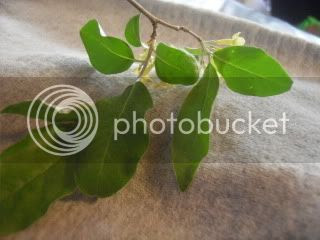 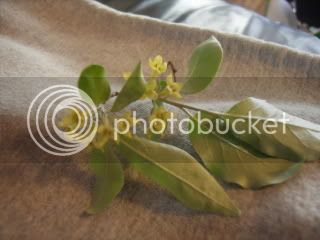 If anybody has a suggestion as to what they think this might be, let me know, 'kay?
Posted by Michele at 1:32 PM No comments: