Not a crafty day

I spent the day with the Karate Kid at a tournament today - his first after a disastrous attempt a few years ago. This was at least better organized.

Some background: My middle kid, 11, got his black belt a week ago. This is him after his belt test with the school's owner/director, Mr. Derek. (If anyone is looking for an outstanding program in the upper Montgomery County/lower Frederick County area, Strive Martial Arts in Damascus, MD or Gaithersburg, MD is outstanding.) 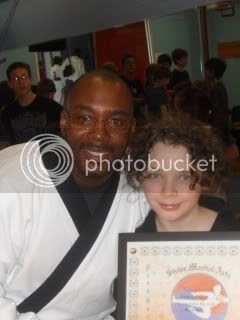 So today, he did the forms competition in the tournament. Because of some weird way AAU calculates age, he was in the 12-to-something group even though he's 11. And not big for his age. AND all of the black belts compete against each other, so the next least experienced kid had two chevrons - almost a second degree black belt. The other kids were at least second degree black belts. 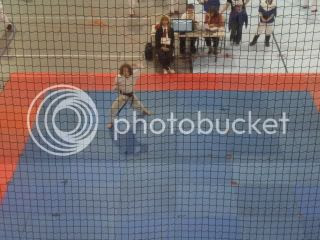 He actually did fairly well - but came in last place in his group. Which upset him greatly. I talked him down some, another kid's mom talked him down some more, and Mr. Derek told him what he needed to work on most. There's another tournament coming up in a couple of weeks - hopefully that will go better, or at least he's do better compared to his score this time. 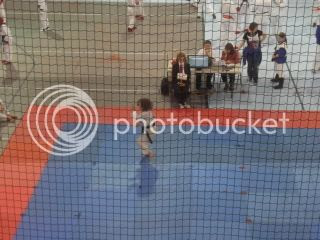 Posted by Michele at 6:15 PM No comments:

I've been working on FMQ on the 9-patch-a-day quilt. Starting out doing spirals in the 9-patches, freehand. They're far from perfect, but they're getting DONE. I'm going to do feathers in the sashing and stick a fork in it.

I think this photo is a little washed out, but the quilting shows up better than I expected. 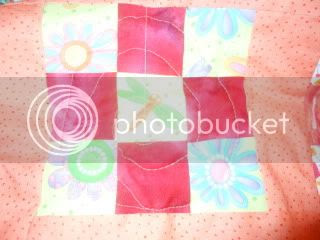 Our guild had a sit-n-sew last Sunday. Heaven. A whole day to sew, have lunch with friends, just chill with no distractions. I got surprisingly little done!

This is my space: 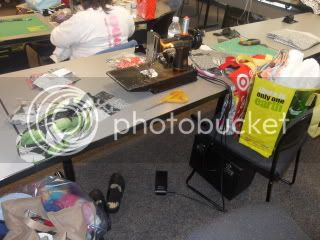 I got my next set of six-a-month blocks done: 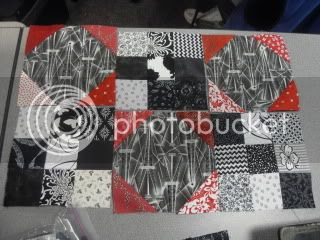 The 9-patch quilt got sandwiched and pinned - gotta love big floor spaces! I'd planned on doing some quilting - but not only did I forget the free motion foot for the Brother, I also forgot the power cord and the foot pedal! What a goofball I can be sometimes.

I also put together a few pinwheel blocks. No idea what I'll do with them, but they're done.
Posted by Michele at 5:43 PM 2 comments:

This morning and through early afternoon, it was pretty much non-stop CSI.

But for the past hour or so I've been watching Oklahoma! What a treat. The old musicals don't seem to show up on TV as often as they did when I was growing up. The Lovely Daughter is in a production of South Pacific at her high school, so when that was on a few weeks ago we watched it. It was the modern version, though :( Much as I like Harry Connick, Jr., it just wasn't right. It doesn't help that I'm not a huge fan of Glenn Close either.

I think I will finally have to break down and order a DVD of The Music Man - it's probably my favorite of all.
Posted by Michele at 1:48 PM 1 comment: