One of the advantages of owning an old mechanical machine is that brute force occasionally works to fix things. I took a screwdriver to the tension assembly, fiddled some more with the settings, and the looping problems disappeared. JOY!

Most of the water is now done, I think I need some more sand, and the sky needs to be dealt with. Then, on to applique...anybody out there ever done applique AFTER quilting? I'm thinking about it...
Posted by Michele at 7:33 PM 2 comments:

The sewing machine gods must be angry

I've been happily piecing away on my Featherweight, when today it starting looping on the bottom and skipping stitches. I re-threaded, put in a new needle, took the bobbin out and put it back in - still issues. Drat. So I drag the trusty FashionMate downstairs and set it up. SKIPPED STITCHES. Maybe it's just too cold to sew. I'll go cut, I think.
Posted by Michele at 5:35 PM No comments:

The other post was at 12:16 am on Saturday, according to my computer...Blogger thinks it was about 8 pm on Friday?
Posted by Michele at 9:18 PM No comments:

TMOTH has been sent to Indianapolis for the weekend. While away, he requested that I upload his shirt design (done) and stay up until the new Woot shirt went on sale to buy it if it was the one he thought was going to be on sale. So I managed to wake up after falling asleep on the pull-out couch with the boys, and am now wasting time with an exercise found on Facebook (thanks, Megan!).

1. Google "[your name] needs":
"Michele needs help adjusting her body regularly, because sitting in one position makes her hips sore, but her body is too weak to move." (Wow. All of my problems certainly pale in comparison to ALS.)

4. Google "[your name] says":
"Take a look at what Michele says about IPA." (That would be the Institute for Public Administration at the University of Delaware.)

5. Google "[your name] wants":
"Michele wants a demo!" (Rarely. Just tell me what to do and let me figure it out for myself.)

6. Google "[your name] does":
"Michele does Dallas!" (Now, really. Would it be THAT hard to think up an original blog post title occasionally?)

10. Google "[your name] is":
"A little Michele is better than none at all." (And some would say better than a lot of Michele.)

11. Google "[your name] loves":
"Michele Loves Halloween.." (Just not as much as Thanksgiving or Christmas. Or Valentines Day.)

Well, that killed almost 15 minutes. If it wasn't so danged cold in the dining room I'd go piece something.
Posted by Michele at 8:52 PM 2 comments:

I got a good start on the challenge quilt this weekend.

Sand - done
Water - mostly done. It's a little dark - I think I need some more light-to-middle range turquoise.
Sky - Not started, but it shouldn't take long.

I think I need to applique the figure on, then sew over the legs...but I'm pondering doing the applique AFTER quilting the background - anybody have any experience with this?
Posted by Michele at 7:22 PM No comments:

Oh. My. God. The best hot chocolate mix EVER.

How is this crafty?

It was in my goody bag from my quilt guild secret sister!
Posted by Michele at 4:48 PM No comments:

We had a wonderful vacation. Two trips to two beaches, photos from one beach:
The family: 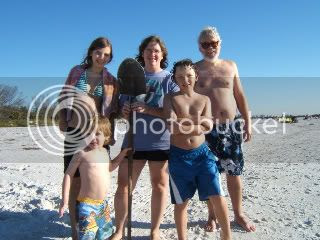 My Beach Boys - these beach photos are pretty true color and will be used to pick fabric for the challenge quilt: 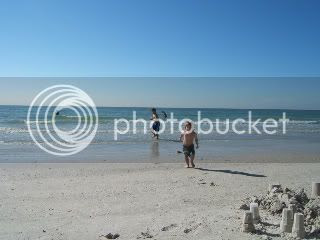 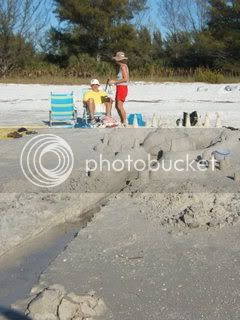 My lovely daughter in the surf: 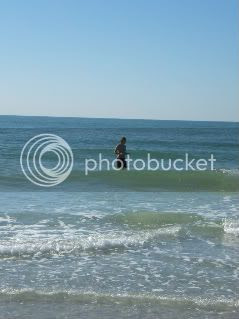 We spent a lot of time going through boxes of old stuff, and I came away with some treasures - the original manual for my Featherweight, a buttonholer attachment, and a zig-zag attachment with at least 8 stitch patterns. Plus a LOT of other stuff my brother didn't want - my grandmother was a magpie like me, although we did toss a lot of stuff as well. She clipped recipes from the newspaper - this was in the days before the internet - and probably 95% of those were tossed.

We also went on a gator hunt! My middle son at one time had decided that there were no alligators in the wild, so we went to find one. We saw lots of wood storks, some sandhill cranes, hawks, egrets, herons, and even a Florida deer. And a gator! about 7 feet - DB has yet to send me the grainy photo his photo-binoculars took.

If the Small Man hadn't shared his crud with everybody, it would've been a perfect vacation.
Posted by Michele at 11:26 AM 1 comment: