Christmas in June (and July, and August...etc.)

My internet buddy Amanda in Australia has issued a Christmas Challenge. The task for the month of June was to make a Christmas ornament. I've been putting mine off (ya think?) but finally just decided to get it done tonight.

I had some scraps of sewn-together Christmas fabric squares that I think one of the kids dragged home as a quilt show prize. I took it apart and tried the half-square triangle technique demo'ed here:
http://www.youtube.com/user/MissouriQuiltCo

It worked great, but the pinwheel block I started with was WAY too big, so I took the four pieces and cut them some more: two into smaller pinwheels and squares and two just in half. So I wound up with four ornaments instead of one. Only one got bound, and I glued the button on to cover the thread tangle from sewing a hanging loop on :) 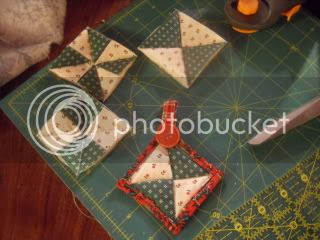 I may or may not finish the other three tomorrow - I have some neglected black and white nine-patches that need attention, as well as my Art Now for Autism mini-quilt.