I have a wee fondness for fabric... 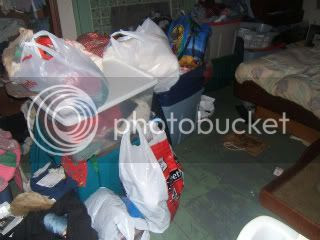 and all sorts of other craft materials as well.

The scary part? This isn't all of it. Only about 2 small bags are yard, and there's none of the beads, trim, buttons, paper crafting, or other craft supplies. Even scarier? There's a significant amount of fabric already "organized" that's not represented here either.

I got everything moved from the playroom and other assorted hiding places around the house into our bedroom so I could have it all in one place. I started washing the stuff that had been in the basement to get out the musty basement-y smell. That's nearly done.

Ah well. It'll get done and I'll be able to find things by sorting through only four or five bins instead of all ten.
Posted by Michele at 7:10 PM

Oh my. I think you need a bigger house.

Wow, I think you need an additional room added for your crafting!